Last week we welcomed the arrival of Austin, this year's seasonal ranger, who appears to have brought the weather with him from his previous posting in the Grampians. Within hours of getting here, the road to Kelton Mains might as well not have existed as the whole area was buried beneath thick, thigh deep snow. Inaccessible by car, the estate path and nature reserve became the province of those determined enough to wade through the drifts. The photo below does some justice to the reward that awaited them: 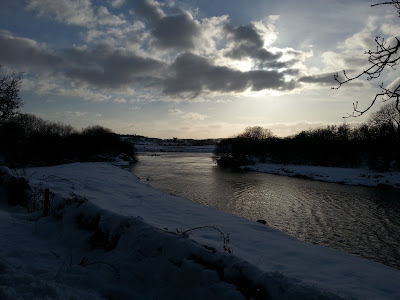 Since then the countryside team has been busy cutting and clearing the debris whipped up by the high winds, and we're expecting quite a bit more if the forecasters are to be believed. The paths at Rockcliffe are relatively clear and the views across the snowy estuary are rare ones indeed, so if you're cabin feverish after hiding from the weather, consider a trip over there.
Posted by NTS Dumfries and Galloway Countryside Team at 2:20 PM