The story so far -

So just a quick recap for everyone to get you up to speed with what's happened so far this year.  Our male osprey (Darvic ring Black80) arrived back on the 28th March. The female bird did not arrive back until the 11th May and was in fact a different bird to previous years. We were able to tell by the fact that the new female bird was ringed whereas the previous female was not ringed. The new female could be seen to have a blue Darvic ring on her leg but unfortunately we have not had a good enough view through a powerful scope to identify her yet. The arrival of the female on the 11th May was rather late as pretty much all of the other UK birds had arrived at their nests by mid April at the latest.
The birds showed signs that eggs had been laid around the 30/31 May. We believe the chicks hatched on the 5th July. Again these dates are very late as a result of the late return of the female. It is believed that these are the latest chicks to hatch in 2012. The week beginning the 16th July we had confirmation that there were two chicks in the nest and over the weeks since we have had more and more regular sightings of the chicks as they were being fed and as they were starting to grow and stretch their wings.

On the evening of Tuesday 7th August we successfully ringed our two osprey chicks. The process involved climbing the tree in which the nest platform had been constructed. 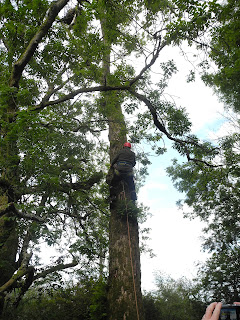 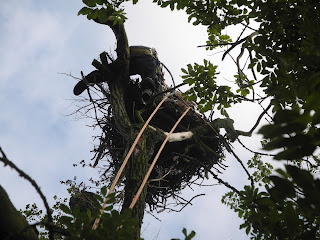 The two chicks were then lowered to the ground where they could be ringed and weighed. The details are as follows:
Chick 1:
Darvic Ring - Blue/White CU3
BTO Ring - 1408278
Weight - 1.673 kg

We believe that both birds are males. 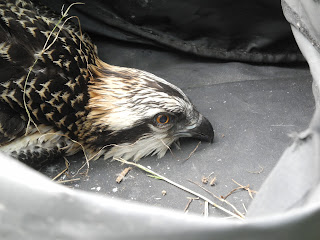 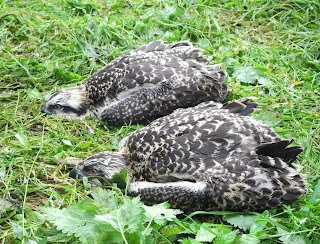 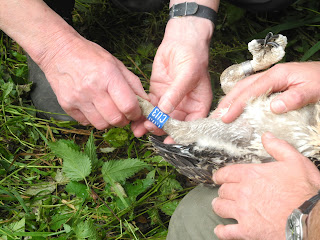 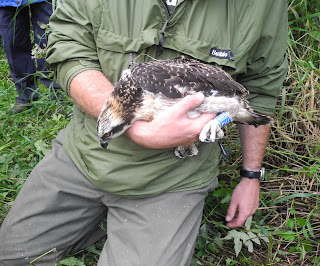 Whilst the chicks were on the ground a camera was installed close to the nest to hopefully get some pictures of the females ring. This would enable us to find out her history and where she is from. If we don't get a clear shot of it then hopefully we will get some interesting shots of some of the chicks.
During the ringing both the male and female birds were seen to be keeping a good eye on the nest and by the time our volunteers got to the platform the next morning things looked pretty much back to normal.
The chicks will hopefully fledge the nest around the 27th August.
Posted by NTS Dumfries and Galloway Countryside Team at 12:37 PM