News from the nest is the ospreys are still incubating and the chicks are due to hatch from the10th June onwards.

We had a third Osprey fly into the nest on Sunday and there was actually three osprey at the nest for about five seconds. The male (Black 80) then chased off the intruder all the way to Threave Castle. He was really diving at it and going for it. Great sight to see. Awesome! I was just worried about the eggs with three birds on the nest. It has be known for them to break when an intruder flies in suddenly.

We have also had some great views of up to eleven red kite with the silage being cut on the fields and the kite coming down for mice, rodents and other such prey.

Finally, the reserve is looking stunning with all the wild flowers out late this spring. The red campion, bluebell, pink purslane, greater stitchwort and wood sorrell look BEAUTIFUL in the wooded part of the reserve. There are lots of butterfly out too, enjoying the good weather. Green veined white, orange tip, peacock, small tortoiseshell, large white, small white and plenty of bumble bee also. 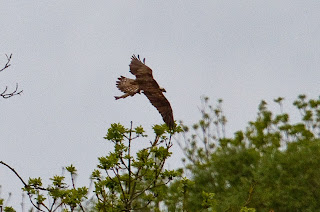 Posted by NTS Dumfries and Galloway Countryside Team at 8:34 AM