Hi there Osprey enthusiasts. Update from the Threave Nest. We may even have two osprey chicks now, but it is very hard to tell from 350 metres away.

We will know a lot more in the next week or so, when the chicks are that much bigger. Joyce (a long term volunteer) spotted the female feeding into the nest on Tuesday (11/06/2013) and since then the male has been bringing in more fish than usual. He has also been bringing in more sticks to build the nest up. This protects the chicks from the bad weather and predators such as heron or buzzard.

I have just been into Castle Douglas Primary School and I am pleased to announce new names for both the female and the male. A game of pin the fish (blind-folded) on the osprey talons was played to determine the name. The fish had the chosen name of the osprey and a target was at the talons. Each child in class 5 and 6 had a go at pinning their chosen name at the osprey target. The closest to the bull's eye won.

So without further delay.............. The new name for the female is OLIVIA and the male is OZZIE.
Come see the new osprey chicks in the next few days, it is an exciting time now at Threave Estate. 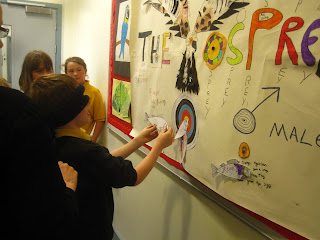 Posted by NTS Dumfries and Galloway Countryside Team at 5:39 PM